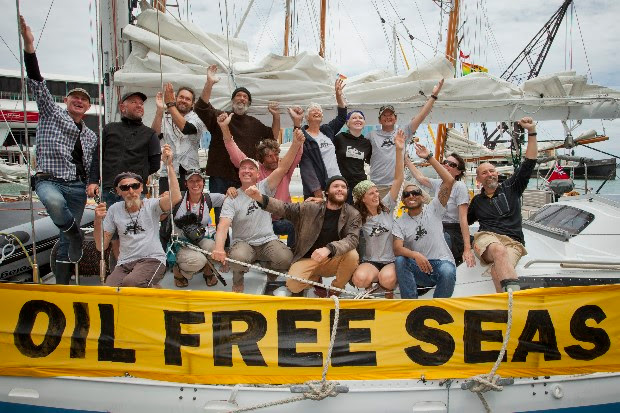 Yay, we did it! But wait, my toothbrush was plastic and I ate food from a can... bloody hypocrite.

It was so strange to come home on the 1st of December from the oil free seas flotilla (the backstory is here http://oilfreeseasflotilla.org.nz). I went from being completely embedded in a floating community, a close-knit group depending on each other in a myriad of ways, to one lone individual once again navigating the corridors of steel and glass in Wellington's city streets. I swayed like a drunken tree in the wind, regaining land-legs after nearly three weeks where everything in the whole universe moved a little or a lot, all the time.

Bewildered and thrown back into normality, it was too hard to resist going back through some of the media stories from while we were out there, both to get a sense of how the issue was living in the public imaginiation, and to feel vicariously re-connected with my shipmates.

What most stood out for me, reading some of the comments and discussions, was how lame the key critique of our endeavour was! The point that many people seemed to feel undermined the voyage was the hypocrisy of protesting against deep sea oil exploration while dependent in some shape or form on oil. I felt like writing about this hypocrisy problem, not because I am especially hurt and feel a need to defend the flotilla, but because it seems like an increasingly typical and banal debate in this movement to break up with fossil fuels.

Basically the argument goes like this: "These people are bloody hypocrites protesting against extraction/excessive use of [insert fossil fuel] because they themselves are using [insert oil related item]." Sometimes the speaker is right (yes, the flotilla used some diesel -although our engine died on day 3, so not much!), and sometimes they're wrong, like here:


Hon GERRY BROWNLEE: ... I would simply like to note, then, that that flotilla is out there powered by dirty diesel-guzzling engines. [Interruption]
Mr SPEAKER: Order! A supplementary question has been called. Gareth Hughes.
Gareth Hughes: I think the Minister will find that they are yachts.*

But actually, it doesn't matter at all whether they're right or wrong, it's the petty neh-neh-ness of hypocrisy noting that bothers me. It's a gross, competitive, "I recycle so I'm better than you," trivial, spiteful way to critique. "We all depend on oil products therefore it's hypocritical to oppose them." I challenge that logic.

Yes, I try and limit how much fossil fuels I create cause to be burnt. But I don't do so in order to manipulate how other people perceive me and be somehow more credible as an activist. I do so because I feel like they are hurting the world and I find that hard to forget. My personal consumption of the oil-related products most of us rely on is totally unrelated to my right to oppose deep sea oil, or Bathurst coal, or tar sands. It's a typical symptom of a culture of competitive individualism that we feel this need to critique the personal choices of those who are trying to open up a conversation about where we get our energy from and what we do with it.

No-one has a nice handy perch outside of history from which to birth change - all we can do is work with the conditions, creatively, imaginatively, but not magically out of nowhere, in an untouchable perfect vacuum. If I tried to do that I would a) spend all my time trying to be perfect and have no time for achieving anything and b) be stressed all the time about what people were thinking of me. Life is not meant to be about being a martyr or obsessed with self-denial! It's a fast track to resenting everyone and everything. We need to give ourselves permission to work with what we've got. As an immaculately mustached young guy whose name I've forgotten said in a room I was in recently – "our generation didn't choose these systems. If we did we'd have chosen better ones." We are part of this car-dependent culture, this legacy of domination and greed and emotional repression, we're just doing the best we can with what we inherited, what we were carefully trained into, just like the generation before us. We need to use what we've got to create something different. I'm not making an argument that my fossil fuel use should be judged in relation to what change I create. I'm saying it's unrelated, and no-one else's business but mine. Who cares about me? Engage with the ideas as they appear in your own life! See if something is true for you. Enough with the hypocrisy police.

It seems like behind all vitriolic hypocrisy-accusations is a fear that people are going to be judged by their habits, that my actions are somehow condemning them and their lifestyle, that once again they are going to be found to be not good enough. I can understand that, because a heap of environmentalists are incredibly judgy and use caring about the planet as a disguise for hating humans and playing a subtle game of oneupmanship. And I know very very few humans who don't have some kind of feeling of being not good enough, at some time, in some way. Maybe all the time.

The troubling thing is that I feel like a fear of this hypocrisy police backlash stops a lot of people from becoming really lovingly critical of this mess we're embroiled in, stops them voicing their concerns and ideas and fears. One man interviewed by Campbell Live in Kaikoura said something along the lines of "I'm not sure about deep sea oil, it seems pretty dodgy, but I drive my car every day, so I guess I support it." To me that sounds like he's formed a position based on a concern about being attacked for hypocrisy – and judging from the fb and media comments I've read, that's a valid enough concern. What's the solution? Maybe... don't be a dick? 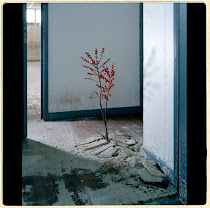 Confessions of a wordsmith on the path of real life.